As more and more wine is collected and traded, the market continues to evolve. Ensuring that the information and data we base our decisions on is as up to date as possible is very important, and institutions such as Liv-Ex are invaluable in looking at and analysing this data.

“Declared the “fine wine industry’s leading benchmark” by Reuters, the Liv-ex Fine Wine 100 Index represents the price movement of 100 of the most sought-after fine wines for which there is a strong secondary market. The index is calculated monthly.” 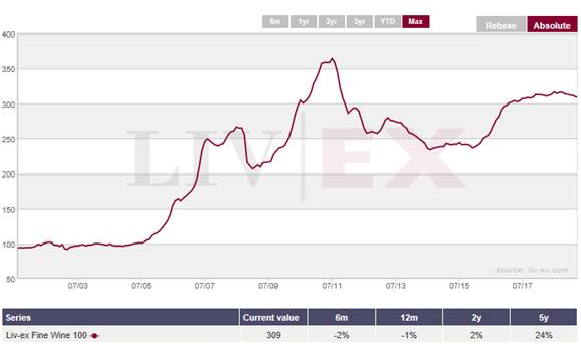 The influence of critics and choosing your wine investment portfolio

Uber-influential wine-critic Robert Parker has now all but retired which leaves a handful of critics to influence consumer buying. These include but are not limited to: Neal Martin and Antonio Galloni of Vinous Media, Jane Anson of Decanter Magazine, Lisa Perrotti-Brown of the Wine Advocate, Jancis Robinson MW, Jeb Dunnuck, and James Suckling. There is also a new wave of point scoring systems which collate a variety of factors to score wines, such as Wine Lister.

The below graph demonstrates how the price of 2009 Smith Haut Lafitte surged over 115% overnight after Robert Parker awarded it a perfect 100 Points in his publication The Wine Advocate. 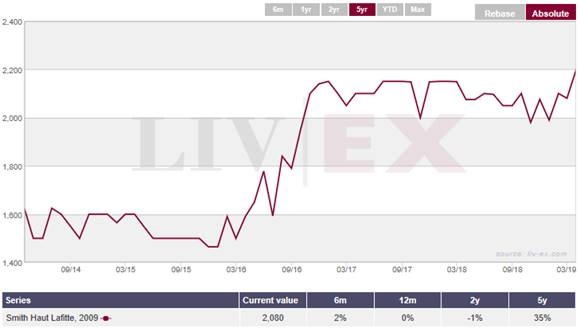 Using this sort of data is brilliantly useful in spotting potentially rewarding wines for investment minded cellars. With demand for Ch. Margaux, one of the five Bordeaux ‘1st Growths’, on the increase, the data on the 2005 vintage shows us that this is a long way off its previous high, and has also yet made little in the way of movement back towards that peak: 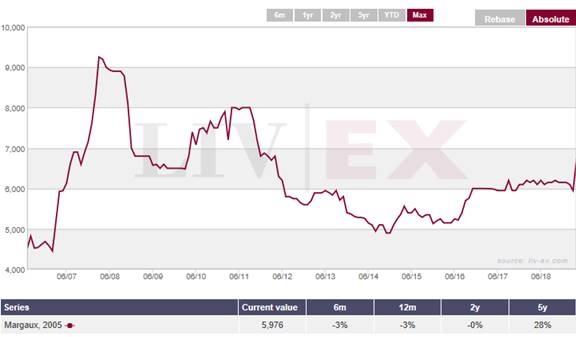 That is unlike another of the Bordeaux 1st Growths, Ch. Mouton Rothschild, for which the 2005 is also viewed as a good addition to an investment cellar, but recent trades have pushed prices back up, and moves to the highs of 2011 are somewhat closer here: 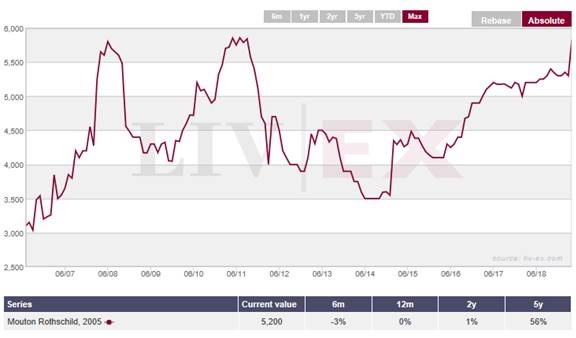 Choosing the right vintage is key

Knowing which vintages to look at is key in maximising your return, ensuring sustained demand and that the wines can last the term you intend to invest for. Although we may recommend looking at top wines in ‘less favourable’ vintages, these decisions should be carefully considered.

Although many of the world’s wine regions have classifications in place to help distinguish quality levels within an area, there is arguably no classification more widely known than the 1855 Classification for the wines of the Médoc. With 58 Chateaux sorted amongst five levels of classed ‘growths’, the ‘First Growths’ have become some of the most sought-after wines in the world. Although this classification is still broadly accurate, it must be noted that the classicisation has changed very little since 1855 and that there are other factors which can heavily influence the price and demand for a wine. For example, ‘Fifth Growth’ Chateaux such as Pontet Canet; Lynch Bages and Grand Puy Lacoste regularly produce wines of quality to match Chateaux higher up the classification, while also often receiving scores from the critics to reflect this. The classification of St Emilion however has been updated as recently as 2012, and though any update is often closely followed by controversy, the classification of 2012 has for the most part stuck. Potential and actual promotions, and relegations, will impact the price of the wine from any given Chateaux. For example, after Ch. Pavie and Ch. Angelus were promoted in 2012, prices for older vintages increased significantly.

Many other regions have classifications in place, and it’s worth familiarising yourself with these if considering investing in that region.

For more information about wine as an investment, or to start a portfolio, please contact us on 020 8 858 6011 or email [email protected]